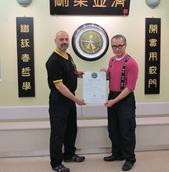 What is Wing Chun ?

~~ Wing Chun Kuen,(Wing Chun literally means 'forever springtime' or 'praising spring',) is a Chinese martial art that capitalizes on simultaneous attack and defense, using speed as power vs. relying on physical strength, and “borrowing” an attacker’s actions in order to make use of it. The martial art was later refined in Hong Kong by the late Ip Man, in the 40's, but today's day, once again has been refined by our GrandMaster Wan Kam Leung, calling it, Practical Wing Chun. Wing Chun's specialty is in close contact combat, using quick punches and kicks with a tight defense, coordinated through agile stances and footwork for a quick advance. The effectiveness of this fighting style is achieved by well coordinated attacks with simultaneous defense and vise versa. Due to its effectiveness this martial art makes for an effective form of self defence. The student must learn to deliver the correct amount of energy or force, whilst staying relaxed when possible. A good Sifu (instructor / teacher) will teach the student to overcome force and strength with positioning and turning rather than meeting it head on. The style uses kicks, sweeps, elbows, palm strikes, punches, trapping and control techniques as part of its fighting arsenal. With these traits, Wing Chun has become known as one of the most efficient methods of self-defense in existence.

Every martial art consists of movements designed to deal with specific attacks. Punches, kicks, combinations, ground fighting, locking, trapping, throwing, etc., are trained extensively, as well as any weapons,  that art might work with. By its very nature, a martial art also generally sees the practitioner being required to possess a superior level of fitness in order to work the actions being trained. This is why you see the more “acrobatic” actions being performed by those in their younger years vs. those in their later years.

Wing Chun, however, takes a different approach to the entire spectrum of self-defense that other arts train in. The mindset of this system is that everything we do in our youth, we should be able to do until the day we die. Many Wing Chun masters have demonstrated that they are more skilled in their later years than they were in their youth. This comes from years of training, of course, but also because they have grown more relaxed and pliable, as well as being able to move more efficiently in order to borrow the attacker’s actions.

For example, if someone punches and you block the punch, you are contending with force-vs-force. Whoever is the strongest of the two forces will generally have better odds of success. But instead of blocking or halting that force, what if you could simply dissipate that force with a slap of the hand? I have seen colleagues in other methods spend years developing their punches that would go through brick walls, yet with a simple Pak-sau (Slap-hand), all of that force was moved to the side.

Or what if you are a small-framed woman being attacked by a 250-lb. behemoth? You cannot realistically go head-to-head with such force, as sheer brute power will overwhelm you. Instead of taking all of that force head-on, Wing Chun teaches to “borrow” that force and use those actions to determine your defense.

That might sound a little mystical, but in reality, it is one of the most efficient ways of approaching real life. Because you have no way of knowing what skills your attacker has (if any), the training of pre-set patterns is unrealistic. What if your attacker does something that you haven’t trained to defend against? Training skill that requires you to be physically stronger or more flexible than your opponent are skills that will degrade simply with age, too.

It might be useful in our youth, but simply getting older will decrease or even negate it completely. Instead, a more logical approach is to create a skill set based on common-sense principles, principles that apply to men, women, and even children (note, however, that Wing Chun was not created with children in mind, and there are many concepts and movements in the system that they have a difficult time in learning).

Rather than training for sheer physical strength to overcome the opponent, Wing Chun teaches to “give up” our force so that we can “borrow” the actions of the attacker.

•Instead of blocking, we will redirect or deflect.

•Instead of trying to “out muscle” our attacker, we will side-step and attack the open or least-protected areas.

•Instead of stepping back from the attacker’s kick, we will “explode” forward so as to decrease the kicking distance (thereby limiting the power it can produce).

•Instead of blocking and then counter-attacking, we will attack while defending.

•Instead of one-two type of movements, we stay offensive in order to keep the attacker defensive.

Using principles such as simultaneous attack/ defense, relaxing in order to create explosive speed, and adhering to the Centerline and Straight line Principles, Wing Chun is the exact opposite of what you see for most martial arts.

Wing Chun training, centers on drills and application of techniques. There are only three hand forms, a wooden dummy set, and two weapon sets in the entire system. However, to truly grasp Wing Chun, one needs to understand the ideas and theories behind the techniques. The entire system can be learned in as little as three to five years, but mastery can take a lifetime. Sifu Javier Fernandez has been instructing Wing Chun since the 80's. lately in the last few years, studing under Master Sam Hing Fai Chan, He travels to their Training Facility on a very regular basis from his home town to be training with his Sifu.

The martial art Wing Chun is sometimes referred to as Ving Tsun, Wing Chun Kung Fu (or Gong Fu),Wing Chung, Wing Chun Boxing, or even Wing Chun Kuen (fighting) amongst some other names. More recently research shows people write Wing Chun Gung Fu and Wing Tsun. The reason for these differences is because Chinese text does not translate precisely into Western letters or even western speech. However the name is not the important thing. The most important thing is that the student learns an effective form self defence and fighting. The martial art is a style of Kung Fu. Kung Fu roughly means time and effort and originally referred to any skill painstakingly developed. Recently Kung Fu has become synonymous with martial arts. The Chinese characters for Wing Chun